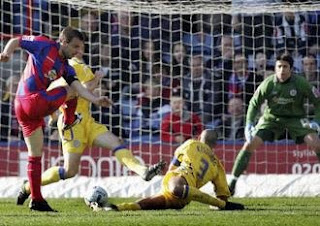 Palace ran out 2-0 winners against Leicester thanks to a first half strike from captain Carl Fletcher and a late, late penalty from Ben Watson in the 2nd minute of added time. It wasn't the prettiest of games, and Palace made hard work of a Leicester team who dropped their heads after going a goal down. However, a couple of second half subs by the Foxes got Leicester back into the game, and they created a number of chances as Palace spurned several golden opportunities to make the game safe. Michael Hughes made a welcome comeback on the left of midfield to tighten up Palace in the centre of the park. Leicester so nearly nicked a point when Kiraly had to save from Jason Jarrett at full stretch in the 88th minute, only for Palace to win a clear cut penalty and add gloss to a nervous scoreline. The win for Palace may keep some talk of Play-Off ambitions alive, but in reality it's all about building for next season; blooding youngsters and making fringe players play for contracts. Unless of course we go to the Hawthorns on Wednesday night and nick a win against promotion certainties West Brom... then watch the calculators come out! Text nicked from EagleEye Live, edited by moi.

Next fixture: Wed 14th Mar' away to West Brom.