I'd like to be able to give a proper match report but I could barely bring myself to sit by the computer to follow the live text updates from the Croydon Guardian and Sportinglife.

Palace needed a point to secure their status as a Championship (2nd Division) club whilst a win for Sheffield Wednesday would see them survive and Palace relegated. Thankfully Palace were able to hold on for a 2-2 draw earning the single point required.

Now the really hard work begins for Palace as we try to find a buyer before the start of next season, otherwise the penalty imposed by the Football League will be far harsher than the 10 point deduction suffered this term.

For all the moaners and scoffers out there, I should perhaps make clear that although Palace are in administration, we didn't choose that option, unlike Portsmouth who used it as the classic route to avoid the full obligations of debt. Palace were forced into administration by an agressive creditor which wanted their money before the Inland Revenue got theirs. Palace had a plan in place to service the debts but the loan sharks (there is no other way to describe Agilo) refused to wait. ironically their behaviour means they still haven't got their cash and now they'll never recover it all. What a bunch of idiots!

Review of Final Day of Season

Hart is mobbed whilst Irvine looks at the time 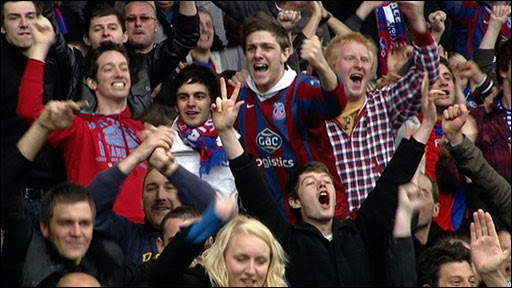