I said in an earlier post that I would try and find a church website in New Orleans with relevant prayer topics etc, but unfortunately I've not found one yet. However, I did come across the following article and photos on the BBC News website.

It's brilliant to know that the church is responding to the gospel by reaching out to those hit hardest by hurricane Katrina. In Galatians 2:10 Paul wrote: "All they asked was that we should continue to remember the poor, the very thing I was eager to do." The poor are dear to God and close to his heart and when the church acts to help the needy God is really happy. The following article should warm our hearts too.

The following article is ©BBC.
‘We’re from Jesus’
The Soul Patrol rolled into Bogalusa, Louisiana, ten days after Hurricane Katrina did.
They brought with them food, water and clothing.
Local residents assumed that they were from the Federal Emergency Management Agency.
“Are you with Fema?” one woman asked.
“No, we’re with Jesus,” was the reply. 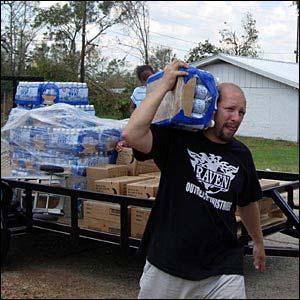 Homeless helpers
The dozen volunteers passing out aid were from Raven Outreach, an Evangelical Christian ministry.
Founded two years ago by Pastor Troy Bohn Raven aims to bring the gospel to Sin City itself – New Orleans.
Or it did until Katrina. Now the core of Raven Outreach is itself homeless, camped out in the garden of a friend 60miles away. 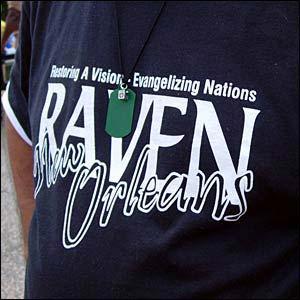 ‘Can we pray for you?’
They are passing out more than just food and water.
Pastor Troy also asks, “Can we pray for you?” Most people say yes.
His passionate, high-speed prayers range over a wide variety of subjects, including speeding the work of electrical repairmen.
“Because the Lord God cares about that,” he says. 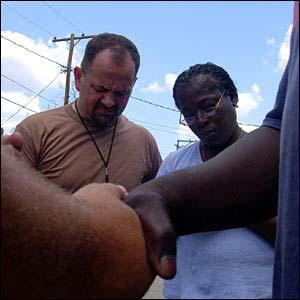 Pizza delivery
They have been on the go since the hurricane hit, Pastor Troy says.
They had taken refuge in Natches, Mississippi, so they started there and have been working their way around devastated communities, distributing food.
“In Natches, Domino’s made us as many pizzas as they could make and we passed them out to people in parking lots,” he says. 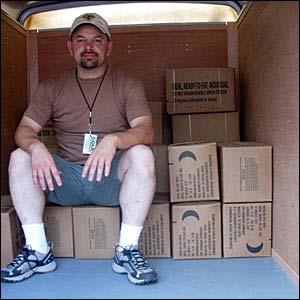 Donations
Friends have come to help, including Max Montano (left) and his wife Kimber come from Amarillo, Texas.
“I called some people and we had two to three truckloads of donations within a couple of hours. My living room started looking like a warehouse.” 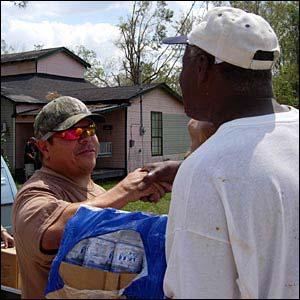 ‘Fell into place’
Troy Bohn’s brother Todd also works with Raven. Disaster relief was a natural outgrowth of the church’s mission, he says.
“This is our ministry already.
“We’ve always been feeding people, so it just kind of fell right into place with this tragedy that we knew we could do some good.” 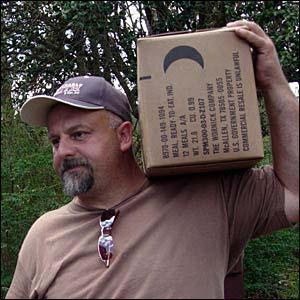 ‘People know best’
Many people in Bogalusa are powerfully affected by their meeting with Raven, including Gloria Avery, 44, who is left in tears.
After praying with her and embracing her, Troy Bohn slips a wad of cash into her hand.
“As God brings it into our hands, we’re going to let that stuff loose. How they use it, they know best many times.” 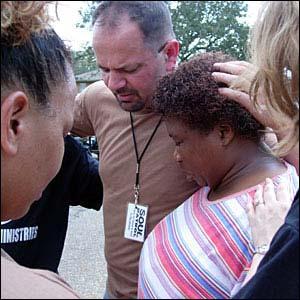 ‘Part of the solution’
“We see a lot of people weeping but we bring hope to them through Jesus,” associate pastor Alex Hill says.
“It’s time to start focusing on the good. It’s blessed more to give than to receive.
“People give us donations and as much as they give us, we give out.
“We’re going to give. We’re going to be part of the solution.” 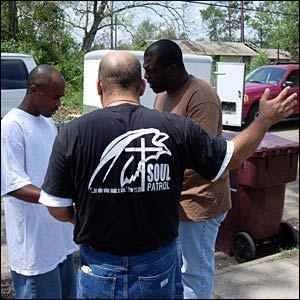 To find out more about RAVEN -the group featured in the above article- click here.