Dean & Joel popped into CNP briefly this afternoon, mainly to catch up with Michael but also to see Dina. Remarkably as we discussed this at lunchtime, Paula suggested I take Joel to see M.i.c.h.a.e.l to which Joel immediately said: "I see Michael", how did he know that was the name we were spelling out? Never mind! 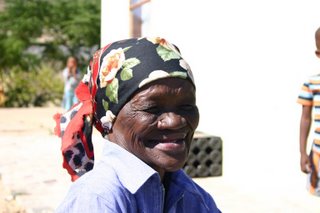 Whilst chatting with Dina, she informed Dean that Evelyn had died in the hospital this morning. This is a really sad loss for the community. Hopefully the funeral will be later this week so that Dean is able to attend as he's off to Lesotho on Sunday as part of a mission team (more on that later).