I've long held the view that science is little more than a value or belief system rather than the exact and objective discipline it claims to be. Whilst some branches of science definitely have value (medicine is a class example) not everything done in the name of science is objective or empirically quantifiable.

Now the goof balls at the International Astronomical Union (IAU) have confirmed exactly what many people have long known...science is far from exact. By demoting Pluto to a lesser category of 'object' they have brought shame and ridicule upon themselves and their discipline. Hooray for the scientists!

Below is a map of the new solar system as the IAU have defined it. 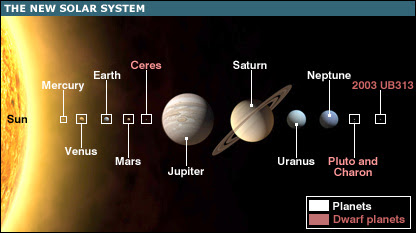 ©BBC
As far as I'm concerned Pluto will always be a planet. Hopefully the IAU will recognise their error and restore Pluto to its proper status and in so doing they will realise that hindsight is the only exact science on the planet.

Read more about this story on the BBC website: Pluto vote 'hijacked' in revolt