I had an interesting morning in CNP today. His first task was to deliver a load of toys and two cupboards to the newly established créche in the community. This créche is a bit of a mixed blessing for us, it's great that at last there is something for the kids and their parents, it means that I can no longer use the containers for my bible study on Thursday mornings. Unfortunately, the running of the créche has also been 'politicised' by the ladies running it and there is quite a bit of tension in the community as a result. Sadly, two of our church members are very directly and very negatively impacted by all this (and they don't even have children young enough to attend). This is a real prayer need! Pray for grace for Mama Jane & Aletta as they live opposite one of the key protagonists and she makes their lives a misery.

I then spent some time with Peter who initially wouldn't speak to me. After pursuing him for a few minutes, Peter explained that he was upset that I hadn't visited him in hospital last week. It turns out that Peter was in for 4 days and Michael was supposed to tell me but for some reason he failed to. Please pray for Peter, his throat cancer remains a continual threat to him, also, he's drinking again at the moment and this really doesn't help him.

I then spent some time chatting with Vicky and Trevor which was great as I don't spend as much time with them as I would like to. It was really relaxing just to 'be' and sit on the kerb with my friends, chatting and laughing and doing not very much. 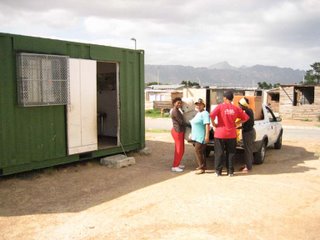 The bakkie loaded with cupboards and toys for the créche 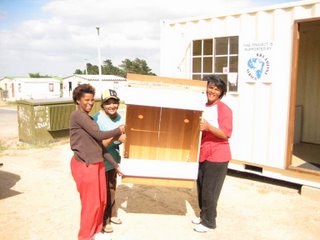 Dean shamefully left the ladies to carry the cupboards whilst he took photos. Left to right: Tracey, Elise & Sandra