Wow what a day! Poor Joel is suffering really badly with diarrhoea. We think it might have to do with some dodgy swimming pool water he drank, 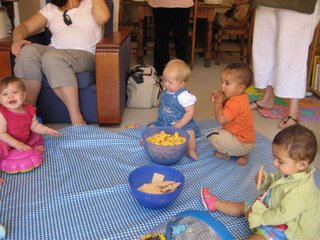 but it could be any number of reasons. Suffice it to say, we have got through several pairs of pants and almost a bottle of bleach today! The day started with a crash when we caught him literally falling off of the kitchen work top as he was caught in his efforts to self-medicate by climbing up to the medicine cabinet. One hour later, the kitchen was clean but still a bit sticky underfoot - boys!!

On the other hand, our second little cherub(!) is also running. He took his first multiple steps today at a birthday party he went to and since then has been trying out his new skill all afternoon. Now the fun really starts!! He was so funny at the birthday party. He spent his whole time standing eating crisps and then trying for the birthday cake when he thought noone was watching him.