Nothing spectacular happened at the weekend, but we did have a few minor but amusing incidents ranging from finding a rat in the toilet bowl (dead thankfully, presumed drowned) to a pigeon flying into a window and leaving an almost perfect imprint of itself. Poor Joel was in trouble at the time and hiding in his bedroom when we heard a loud thud, so Dad went into his bedroom to tell him off. Unfortunately, Joel was reading his biggest book which is the one he usually lobs when angry, so he got a sound telling off. Later in the afternoon we went upstairs and saw the impression of the pigeon in the window, whoops! that would explain the loud thump. Joel then must have wondered what was happening as Dad apologised to him and Mummy gave him some sweets. Great recipe for a confused child.

Sunday was great as we had a rare invite for lunch after church (our church is hopeless in this area!), we ended up staying for several hours, both Joel & Eli had a ball and we all ate far too much, Eli never stopped eating. The company was great and we look forward to spending more time with some new friends.

Joel finds an alternative use for his underwear 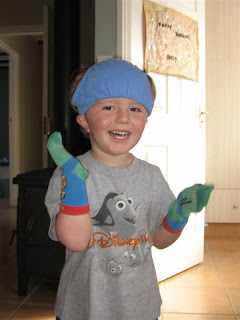 The imprint of a pigeon on our window, look closely and you can see the feathers, head, beak and wings quite clearly. We presume it died but could find no trace of it in the garden outside. 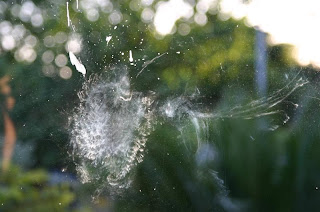 Below is a 2 part video of Eli walking very confidently. Hope you enjoy it.