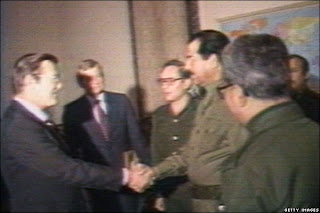 I had no intention whatsoever of posting about Saddam's death, mainly because the man really isn't worth commenting on. However, after enduring a week of endless 'sick' pictures of Saddam with the noose around his neck I feel obliged to say something.

Saddam was a cruel and vicious despot who cared for little other than his grasp on power! Mugabe and others fit the same mold. However, I am deeply opposed to the death sentence at any time and don't believe it can be justified, especially within supposedly civilised societies. The fact that Saddam was hung is bad, but then to learn the true circumstances of his hanging has been quite horrible. Clearly the Iraqi justice system failed and together with the Western occupation forces all in authority have allowed themselves to be dragged down to Saddam's pitiful level.

Two key issues have been highlighted for me in the last few days, firstly, Saddam was executed before justice could be served! He has been denied the right to defend himself in the trial just started and so charges against him have been dropped. That is a travesty of justice! Secondly, we now know that Saddam was executed on the first day of the festival of Eid. Not a great way to win friends and influence people within the Islamic world! Also, the fact that he was taunted in his dying moments displays a lack of humanity in the whole sordid episode.

Islam is a false religion based on a few gross misinterpretations of New Testament scriptures, however, to insult the holy days of any religion is simply not on.

Little wonder that we've lost the war in Iraq!

The above photo (©Getty Images) was taken in the early 80's during the Iran / Iraq war when we were allies with Saddam against the newly installed regime of Ayatollah Khomeini in Iran. Interesting isn't it that an ally can become enemy number one if you just give him a little time. Any chance of hypocrisy on the part of the USA, UK et al? Just a little.