Ahoy there me hearties!

Joel had the most wonderful, magical afternoon yesterday at his friend Ross's 4th birthday party. Of course it was a Pirate party and everyone came dressed and ready for action. As soon as we turned in to the farm entrance there were skull and crossbones announcing the venue and once there, the woods had been transformed with papier mache crocodiles in the stream with a plank to walk over; a croc' for pin the tale on the croc'; treasure hunting; signing their names in pirate blood etc, etc,. Ross's mum certainly has a very active imagination and I think she enjoyed it more than all the guests!!! Joel was in his element and lapped everything up right up to the moment when they all had to go and hunt for a treasure chest which contained mini chests for each of them full of treasure - wow, we have heard nothing else all weekend!!

Needless to say, when Eli turned up half way through with dad, he also entered in to the swing of things as chief 'taster of all party food'. He also amused himself with a puppy and nearly collapsed with laughter when he managed to entice the poor animal to eat some birthday cake from a cup which got stuck on his nose - who says babies aren't sadistic!!

We are finding these occasions to be great ways to get to know the parents a bit better. We had some great conversations yesterday and are now looking forward to another 2 parties in the next 3 weeks - any excuse! Next stop a 'Superhero' Party - oh my word!

By the croc' pool 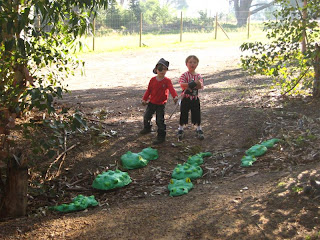 Eli getting stuck into the cake 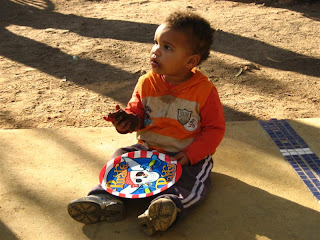 With Morgen and their treasure chests 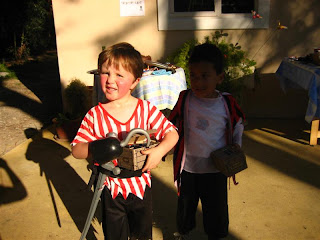