Spring Appears To Have Sprung - At Last!

Today was the first truly Spring like day we've had despite officially being just over two weeks into the season. The temperature was up in the mid twenties which was great and we had a lot of fun in the garden soaking up those long missed rays. Winter has been very long, cold and wet so we won't miss it! Alarmingly, with the first warm day in months there were some large fires on the Helderberg mountain, thankfully there was no wind so they burnt straight up and were out fairly quickly.

We finally caught up with Rachel today who told us a few stories of what the boys got up to over the weekend, it sounds like a lot of fun was had which is great.

Dean is getting stronger by the day, this bout of Flu has really knocked him and he's desperate to be fit for his big race on Sunday. He'll make a decision on Thursday as to whether he will race or not, but he'll be miserable all weekend if he has to cancel! 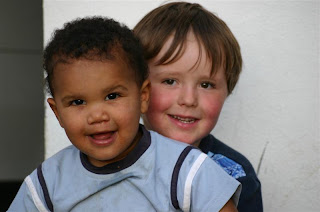 We're so blessed to have boys who adore each other 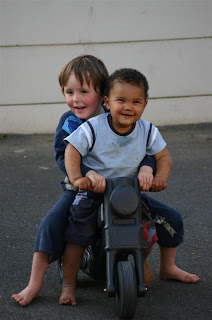