Magnanimity In Victory - Not A South African Quality

To all the south African rugby fans out there.. you won! Not only did you win the World Cup but you deserved to win it. You played a great tournament and were generally entertaining to watch.

You won, live with it!

Having been in SA for more than three years we've come to know and understand quite a lot about what makes South African's tick, especially in the sports arena where they are a very passionate bunch. However, South African's are generally very bad losers and even worse winners. Take the content of the email (complete with photo) below:

In case you have some English friends/colleagues who feel somewhat aggrieved by the "try" that was disallowed...save your breath and just forward them this email...should clarify things nicely. 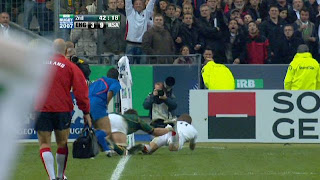 I've discussed the final with a few South Africans and they all bitch and moan about the disallowed try. Why? It was disallowed and rightly so. Let it go! After all, it was the English who suffered for it not the Boks.

Had the boot been on the other foot (so to speak) the bitching and moaning would be really insufferable! However it is the right of the defeated to moan about seemingly unjust decisions. Take the Germans in 1966 and the English after the so called "Hand of God" goal by Maradonna. It is not the right of the victor to bitch and moan about decisions that went in their favour!!!!!