we're off on holiday in Boggams Baai for 10 days from tomorrow and won't be posting in that time so we leave you with this to be going on with...

This evening we put our Christmas tree up, mainly in anticipation of our forthcoming Mulled Wine & Mince Pie 'do' on the 18th (anyone who's been to one in the past knows this is not to be missed). We weren't going to bother with the tree as we'll be in Blighty for Christmas, but Joel was having none of that and with hosting a festive party we thought we should acquiesce to the good old pagan tradition of a tree (Martin Luther has more than the Reformation to answer for). Joel was asking about putting it up all day so I told him that we would do it after Eli had gone to bed. So in true Joel fashion, he asked Mummy to put Eli to bed at 4.30 so we could do the tree! Classic. 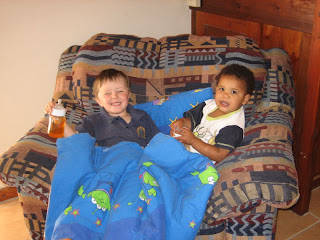 Excuse the nudity! but it is summer here (Blighty will be a shock to the system) 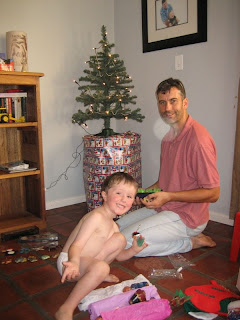 Concentration as he takes things very seriously on occassion 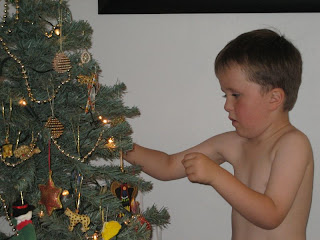 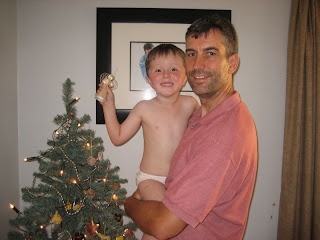 The more observant among you may have spotted our ambitious plans to read two books each whilst on holiday, ha ha.