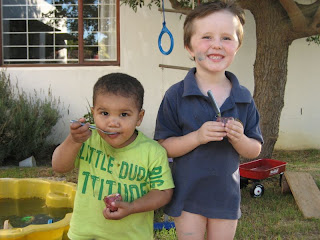 We've had a lot of fun this weekend mostly chillin' out at home. Dean went riding on Saturday morning so Paula took the boys to the gym for an hour and then onto the Nature Reserve so they could watch the emergency helicopter loading up with water before heading onto the fire on the Helderberg again. The helicopter filled up every 7 or 8 minutes so the boys were in paradise watching it coming in so closely. Sadly Dean had the camera with him so no photos of that.

On Saturday we went to Gordon's Bay for some fun on the beach followed by fish & chips for tea. Eli stunned us as he started body boarding on the waves. He's a natural and didn't need a board, so there's an idea for his next birthday!

On Sunday it rained whilst we were in church and the rest of the day was overcast which made for a pleasantly cool day. So we just spent time playing in the garden and messing about around the house, bliss!

The photo above is of the boys enjoying granadillas (passion fruit) from the garden, we're having a good harvest of them at the moment.

The Helderberg on fire again!!! 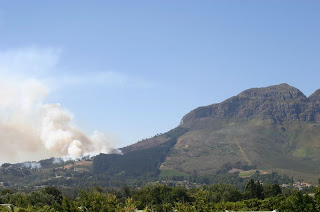 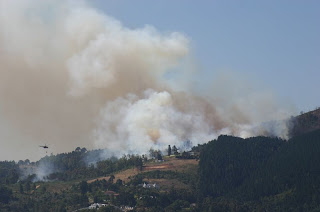 Fish & Chips on the beach 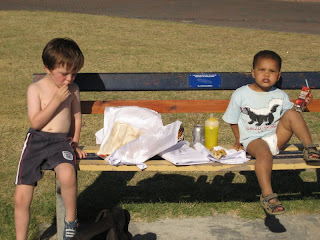 They love being on the beach! 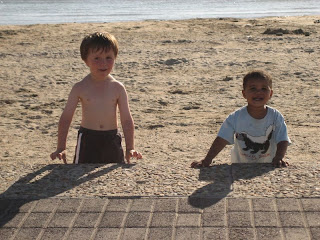 Joel showing Eli how to jump 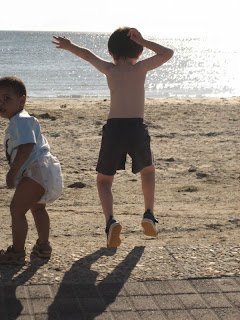