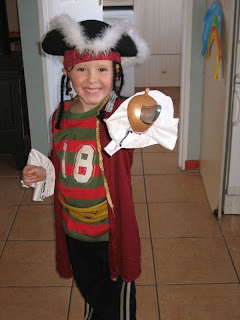 We are learning that you really must never underestimate the power of a 5 year old to 'act out' what is going on around him! As anyone who knows him will vouch, Joel is absolutely potty about pirates - in fact, we're sure he believes he is one - and he is rarely to be found these days in 'civvies'. He must be dressed as a Captain and mum, dad and Eli are always being grabbed to look for Peter Pan, to fight Captain Hook or to debate with Captain Jack Aubrey (Master and Commander)/aka Captain Jack Strawberry after a little early days slip up by Cap'n Joel!! Today found Joel calling a doctor to his bedside to help him with his arm, which had been sawn off, and a bloody neck - all straight out of the film. When mum asked if he would like a book to read in bed (also straight out of the film - good one mum!), he said that that would be difficult with only one arm - good point!

Pyjamas doubling up as bandages and sling 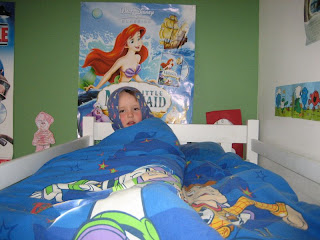