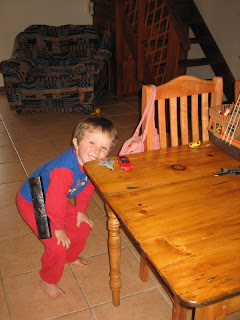 We're alive and well but don't seem to get much time for blogging at the moment so you'll have to excuse the silence.

Just to prove we're still here, here's a photo of Joel playing 'Top Gear' (a well known TV program in the UK), he's re-enacting the episode in which the Hamster races a Bugatti Veyron against a Eurofighter Typhoon of the RAF.

Joel was heard commenting at one point during our time in Blighty: "Daddy really likes Top Gear doesn't he."