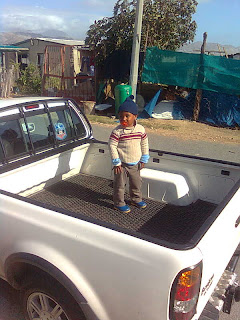 I had a great afternoon in Chris Nissen chatting with Michael whilst we laid a drainage pipe alongside his house and hokkie (see pic on Facebook). It's been a while since we've spoken about some of the issues we went into today and it's really encouraging to hear how God is working in his life and to see how he's growing in faith and maturity. How I wish others in the community would stop gossiping about Michael and others like him and start following his example instead. One can dream!

One major prayer item Michael would really value your support in is that of Joyce's retreat back into alcohol. This really distresses him and causes massive tensions in the home. Joyce had been sober for several months so it's really disappointing that she's drinking again.