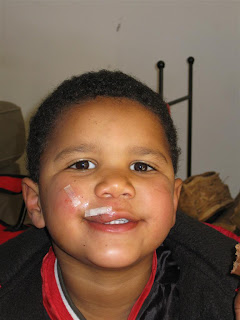 Eli was whisked off to the Emergency Room for the first time this afternoon as he needed three stitches in his top lip.

Initially we thought he'd fallen off his bike trying yet another daredevil stunt but it turns out Rosie (the dog) bit him. Daddy's first response was to get rid of the dog but the Dr that treated Eli reassured Mummy that this is quite a common injury and not to be too harsh on the dog.

It turns out that Rosie had just been given a bone and Eli bent down next to her to pick up a ball but Rosie thought he was going for the bone. The rest as they say is history.

Eli needs a follow-up with the doctor on Monday to make sure the wound isn't infected and to check the stitches are OK. Apparently they don't normally stitch a lip but had to in this instance.

Mummy said that Eli was a real trooper in the hospital and amazingly cooperative when he was having the stitches. He really is a treasure!