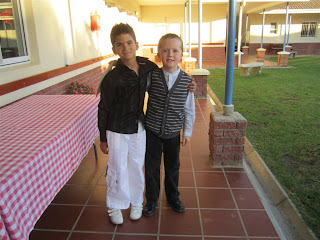 So the big day arrived - Joel's school mini Valentine's Ball!  We thought he wouldn't be all that bothered, but, how wrong could we be!!

Joel had everything planned.  He spent the entire day before worrying about what to wear and then spent an hour making a card for his Valentine (we'll let you guess who that is from the girls featured below!).

From the moment he got home today, Joel asked on the hour every hour how much longer he had to wait and from 4 o'clock was dressed and holding "the card" in his hand!

By all accounts he really did have an absolute ball!!  He did his "moves" at the disco apparently, but didn't win the dancing competition (I blame his Dad!).  He was delighted to see that his friend Nicholas had also made an effort to dress up and not just play football upon arrival like most of the other boys.

We now await the big day on Monday - will he or won't he receive a reciprocal card from his sweetheart?!!! 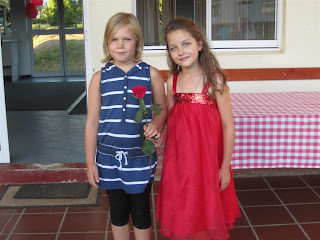