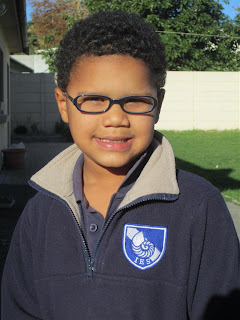 So said Eli yesterday when he put on his very first pair of glasses! After 20 months of visits and tests and eye exercises it was finally agreed that Eli should start wearing glasses. Though he does need them all the time we are starting off with just TV, work on the whiteboard at school etc to get him used to wearing them and in the hope of preserving their life. Odds are already on on how long Eli will make a pair of glasses last!!

We remain so thankful to God for His healing work in Eli’s eyes. We have known for a long time that he has been experiencing sight difficulties but had not realised the extent until the first round of testing when he was just 3 years old. It was explained to us that not only does he quite serious myopia but he also had a stigmatism which meant that his retinas were shaped like rugby balls. The odds were truly stacked against him. We worked really hard together doing eye exercises as the opthalmic guy felt that Eli was too young and had too much eye growth development to go to put a pair of glasses on at that stage. Over the 20 months and with more tests and exercises his visual sphere has improved from a score of 8 to a score of 16 (with 20 being excellent), so we were all delighted!! Then last Sunday at church someone had a specific word for healing. Eli went forward and we really believed God to heal his eyes before his follow-up test the next day. When we got to the test we were told that his stigmatism has “gone”!!
More after the break

So, we must now just work with Eli regarding the myopia which is genetic. By the end of the year he will be wearing the glasses full-time and we are hoping that by Year 3-4 he can get some bi-focals to make things a bit easier. We went with him to choose his frames and, of course, he didn’t like any in the free range!!! He was very adamant about this pair and we think he looks really sweet in them! The lovely thing is that he has been walking around the house ‘noticing’ things that we now realise he couldn’t see before and he is able to see the TV from the couch rather than 1 foot in front of it. He says that everything is “clean” again. Thank you Lord for glasses!!!