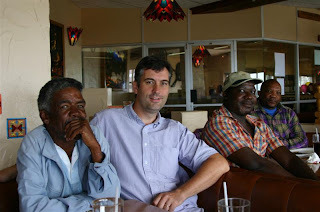 I'm really saddened to have to say that Peter died over the weekend while we were away. He'd been battling throat cancer for a long time now, but that doesn't make it any easier.

Peter was a great guy who rarely asked for anything and on the few occasions when he did you knew he was desperate. Peter was part of my men's bible study group in the community and together we spent many many hours trekking around in a vain attempt to obtain his ID book. We'd been to court, the police, Home Affairs and many oher places in our efforts but all to no avail. Sadly Peter was born in a different age on a farm. Back then births like his were of little consequence to the boers who ran the farms so they weren't registered. He never went to school, rather spending his childhood and youth labouring as a farm hand. At some point he left the farm and became part of the squatter camp that was eventually rehoused in Chris Nissen Park. All in all a sad tale and yet Peter never sought any sympathy. In my view he was a true gentleman!


Also on a sad note... almost three weeks ago Michael had a minor heart attack and as ever the ambulance refused to attend! This is one of many occasions in which the emergency services have refused to enter Chris Nissen. I eventually heard about this a couple of days before I broke my wrist and went to see him and was shocked by how rough he was looking. Being the muppet that I am I then broke my wrist and was unable to do much to help Michael. However on Monday last week we got him to a local Dr for a check-up and ECG which led to a referral to hospital on Wednesday. Paula makes an excellent chauffeur!

Michael and I spent the best part of the day at Hotties Helderberg Hospital where he was eventually seen, had another ECG and an X-ray and was put on yet more drugs. Thankfully his prognosis is looking OK and he was given some good advice on how to avoid a repeat attack.

The system at Hotties the hospital beggars belief and made me very very glad that we have medical aid! The worst bit by far though has to be the pharmacy which is run by the rudest most obnoxious people I've ever had the misfortune to encounter. To say the system they have in place and prop up is taking the piss extracting the urine is a massive understatement!