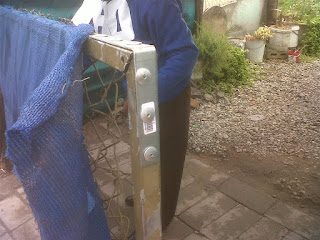 I don't get to spend as much time as I used to getting involved in practical projects and just generally helping to bodge fix things together again. So I was chuffed when Michael rang for a bit of urgent help yesterday.

A few moons ago Michael and I put a gate on the front of his property but at the time he was short of hinges (some might say he was unhinged asking me to help!) so he bodged fixed the gate to the post using the upright as the hinge. Not a great plan if we're honest and here we are a few years later with the gate having fallen apart. The gate frame used to be for the Tiny bubbles Creche sign but we took it off and riveted it directly onto the container classroom wall and Michael recycled the frame into a gate.

This morning I was able to go and get a few brackets and pop rivets ready to bodge fix the gate again. Ideally the gate frame should have been welded but we don't live in an ideal world, so we managed to rivet the brackets at the points where the upright had separated from the rest of the frame. We then riveted some old hinges I had lying around to the frame and then nailed them to the post. Voila! Gate bodged fixed! 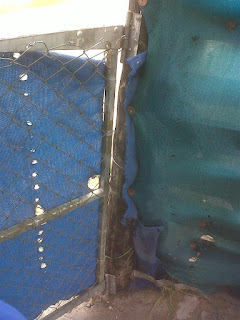 The brackets welded riveted to the frame 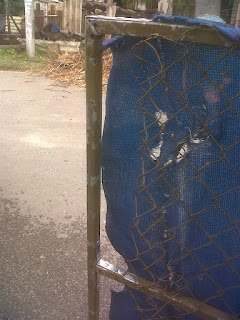 Apologies for the poor quality photos but that's the price you pay for using a cell phone camera!