Is Platinum Really Worth That Much? 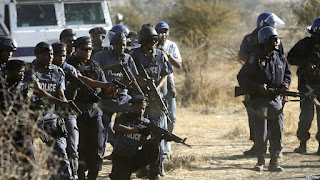 The situation at the Lonmin Marikana platinum mine in South Africa has just hit the international news wires because of the slaughter of at least 30 people by the police.

Sadly it takes such an act for the story to become newsworthy.

Locally we've been following the story for some time on hte local news. It's a desperate situation and at times very ugly. The trade unions don't come out of this story at all well but after yesterday's events the police are mired in an awful stench.

It seems the miners brought knives to a gunfight.

Watching the scenes on TV one would have thought it was a newsreel from the dark days of apartheid but sadly this is the free, democratic rainbow nation doing this to itself.

The BBC News website has an 'In Pictures' feature on the incident and looking at the police they certainly arrived prepared for what they did.

Today there are families missing husbands, fathers and breadwinners, spare a thought and a prayer for them, they didn't deserve this.