Q Is For Queen Size 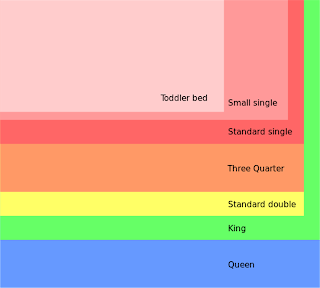 This is totally unconnected to my theme but I was a bit stumped for this one and I really didn't want to steal yet another post from last year!

So Q is for Queen Size, as in bed.

Being a Brit I fully understand why a king size bed is smaller than a queen size bed and the reason makes a lot of sense. Traditionally the king's bed was a place of business, it had a perfunctory role. The queen's bed however was used by her for luxuriating in and being pampered, hence the size difference.

I thought this was universally known and understood but anyone who's ever lived in another country will know it's far from the case. It seems that some nations don't understand the nuances of monarchy and have switched it around so the king size is bigger than the queen size. I'm not sure why this would be the case. Maybe it has to do with hanging on to outdated notions of the king being more important than the queen? Just a thought.


I guess it's just one of the many imponderables of living cross culturally or is it a case of being separated by a common language? I'm still trying to figure that one out.


ABCDEFGHIJKLMNOPQRSTUVWXYZ
This post is part of a series in the Blogging From A To Z Challenge, April 2013.

Labels: a to z challenge