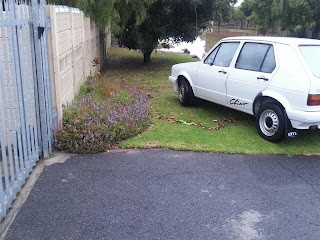 The Western Cape was warned on Thursday to batten down the hatches for an approaching storm on Friday which would last through to Sunday morning. On Friday morning the clear blue skies and 25°C temperature made it hard to conceive of the impending carnage. This was rectified within a very brief period as the black clouds appeared and by mid-afternoon one of the wildest thunderstorms was right overhead. Thunder storms are quite unusual in this part of the world, so the first almighty clap was enough to set the alarm bells ringing.

Within an hour of the storm so rudely announcing its arrival, over 100mm of rain had fallen and we had a serious flash flood on our street. This combined with the Lourens River bursting its banks, a dam on Lourensford Farm overflowing and an already saturated water table and the result was truly appalling. Someone on Facebook kindly pointed out to the folk of Somerset West that they had nothing to complain about given the typhoon that had hit the Philippines. True enough, ours was nothing compared to that, but our reality was still one of devastation as many homes were flooded, a hospital had to be evacuated and many people lost a lot.

The three houses immediately behind us were hit quite badly, with two of them having to evacuate after only having lived there for three weeks. From our neighbours all the way down to town, every house was flooded. The photo above shows how truly blessed we were. We asked many of our friends to pray that we would be spared the worst of the flooding and praise God we were. The line of leaves on the grass show the upper limit of the flood waters on our road. They stopped right by our gate.

We are truly grateful for the prayers of our friends and thankful to our awesome God who protected us from the worst of the storm's  carnage!

Now the clean-up begins. I had to knock some holes in our back wall to release the flood waters in our garden, so they must be repaired. We also need to sort out the sewer inspection hole in our garden because once again it got flooded by the storm waters and burst, leaving a rather unpleasant layer of unmentionables on the grass.

Today the clear blue skies are back and the temp is again in the mid 20's. If it weren't for the reality of the physical damage, you'd never know what had occurred here just a few hours ago.