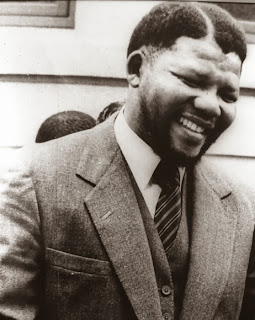 As the world mourns the passing of a true statesman and a legend I want to address an issue that keeps rearing its ugly head here in South Africa.

There is a small minority of people who pop up on every social media site leaving comments about Madiba being a terrorist.  I'll leave you to guess the cultural background of this small group of people. For myself I get a bit tired of it and the racism that underpins this view, so here I'm going to look at this argument and expose it for what it is.

At a simplistic level (I use simplistic in the pejorative sense) Mandela was a terrorist by simple virtue of the fact that on 12 June 1964, he and two comrades were found guilty on four counts of sabotage and conspiracy to violently overthrow the government. Mandela had admitted the sabotage but denied the conspiracy to overthrow the government.  The rest as they say is history and Mandela spent 27 years in Robben Island and Pollsmoor prisons.

Taken at face value and without any context being applied to the political backdrop of South Africa from the rise of the National Party's minority apartheid govt between June 1948 until democracy in 1994, then Mandela's conviction as a terrorist seems complete.


However, this is far too simplistic!


Gerald Seymour is credited with having coined the phrase: "One man's terrorist is another man's freedom fighter" in his 1975 novel Harry's Game.  Whilst Seymour was using it in the context of the Northern Ireland troubles it has a pertinence to the apartheid era of South Africa.

Whilst Mandela admitted the act of sabotage he was convicted of in '64 he was living in an age in which he and every other black person were treated like dogs by the white minority govt. It is against this backdrop that any conviction must be viewed.

Most rational minded people recognise that the minority white government of the National Party was an illegitimate government. It was not democratically elected because only an elite minority could vote and it did not represent the majority, preferring to set the country on a path of segregation. Apartheid in Afrikaans translates as 'the state of being apart'. From 1948 until its end, apartheid was a viciously brutal regime that sought to keep the various racial groups separated with a view to serving the welfare of the white minority to the detriment of the majority.

So the context for any conviction of Mandela or any other anti-apartheid activist has to be seen in the context of the denial of their basic human rights. Mandela was denied basic freedoms within South Africa purely because of the colour of his skin. And so it was for the majority of South Africans until democracy was ushered in in 1994. If you were not white you were told where to live and what to do.

At its height, the apartheid government would suppress dissent with violence, regularly slaughtering unarmed civilians including school children. Torture by the police was well documented and the harsh reality of the daily brutality suffered by the majority at the hands of the minority was quite staggering.

Again, being very simplistic about the history of South Africa it is possible to take the view that Mandela was a terrorist, he was after all involved in the setting up of Umkhonto we Sizwe, a militant organization that violently attacked government targets. However, this was all done in a time when civil disobedience was met with brutal punishments. Tough times demand tough action and Mandela set off on a path he believed was right.

To remember Mandela as a terrorist because of his conviction in '64 is naive at best and downright racist and ignorant at worst. Remembering Madiba as a terrorist simply serves to ignore the grace and dignity he conducted himself with during his 27 years in captivity and the attitude of forgiveness he engendered. He spoke highly of his captors despite their brutality and he encouraged South Africa to rise above the pettiness of hatred preferring the road to forgiveness and reconciliation. This is what we the majority remember Madiba for and we refute the title of terrorist!

The sad voices that decry Mandela as a terrorist never acknowledge the brutal violence of their own minority government. They never acknowledge the thousands who died at the hands of their beloved apartheid govt and they never take any responsibility for the mess they left behind.  I have often heard these same voices justifying apartheid by likening it to the segregation experienced in the deep south of America in the '50s & '60s. However, the segregation in America was never state sponsored and was never as brutal as apartheid.

No other nation on the planet has ever had such a racially motivate political system specifically geared up to the violent oppression of the majority of its citizens by an elite minority.

So I say today, a sad day in which we mourn the passing of our legend;


Madiba was NOT a terrorist!