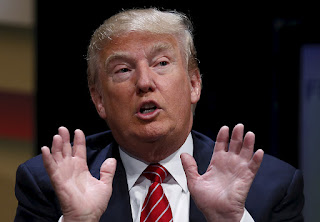 I know little of American politics and if I'm honest I have little interest.

However, in Donal Trump I find myself unusually drawn to the pending US Presidential Elections, if only because he's actually quite entertaining, albeit in the same way that the 1974 film The Texas Chain Saw Massacre is.

As I was reading some stuff about Trump I came across an article by Graydon Carter in Vanity Fair about an epithet he bestowed upon Trump some 25 years ago in Spy Magazine. Back then he called trump a "short fingered vulgarian", which in itself is quite amusing if not a little rude.

Poor old Donald then spent the next 25 years attempting to prove that his fingers were anything but short so the epithet had clearly stuck a raw nerve.

Gaydon Carter has recently been quoted as saying of Trump "To this day, I receive the occasional envelope from Trump. There is always a photo of him — generally a tear sheet from a magazine. On all of them he has circled his hand in gold Sharpie in a valiant effort to highlight the length of his fingers."

The aspect of this that I find most amusing is that in all those 25 years he's never once addressed the notion that he's a vulgarian, but maybe he knows he is and he's happy with that knowledge.