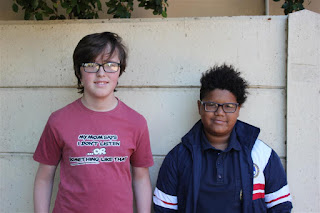 Finally the day has arrived in which our boys return to school for the new year.

Unlike many who are breathing a sigh of relief at getting rid of the kids again we really miss not having them around, though it is also good to get back in to routine.

Eli begins Grade/Year 7 and is taking it all in his measured step, he's gone with a wry smile on his face which would suggest his teacher has no idea what she's in for. Ha ha!


Joel started yesterday and will take a while to find his feet at his new school. It was with great sadness that we pulled him out of the International School, but it was the right move for him. To compensate for his loss, Joel is thrilled to be free from uniform and he can now grow his hair as long as he wants. Stay tuned for updates on that.

Paula wrote this about Joel on Facebook yesterday: "So proud of Joel as he takes his big step of faith into Year 9 today in a totally new environment. Go spread your wings and fly my boy, you're a giant in God's eyes! "Let us go up at once and take possession, for we are well able to overcome it" Numbers 13:30"

Please keep Joel in your prayers, he's mourning his loss having been at the school for 10 years and leaving his best mate behind. Pray too that he settles quickly, makes new friends and flies in his new curriculum.