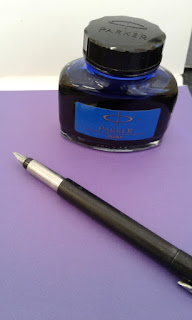 For our Silver Wedding Anniversary last year I wanted to give Paula a gift that would last but also one that had a cost, not a financial cost, but a personal one. So, starting on our anniversary last year I gave Paula the gift of letters. No, I didn't give her the alphabet, though it would have been cheaper, easier and a whole lot quicker. No, what it actually meant was that I committed to writing to her every day for a year, sending her a letter or a card.  Some letters would be posted, some I would hand to her and others were left somewhere for her to find. I know I missed a few days but looking at the little mountain of letters and cards I know did my best. But more importantly, it was a huge blessing to me and a great lesson, but more on that in a bit...

I have to say it was a lot of fun. It was great to rekindle the letter writing skill (we used to write to each other constantly before we got married), especially in this age of connectivity and constant social media interactions when pens are rarely required. The whole experience was enjoyable and the highlight was intentionally setting aside a few minutes each day to write a letter or card. It meant that for a few precious minutes all I had to do was think about Paula and what I wanted to say to her.

Those were treasured moments!


When I first thought of doing this for Paula it seemed like an easy thing to do, after all, how hard is it to pick up a pen and write? It turns out that doing it every day is a bit harder than I expected. The writing part was the easy bit, but there were some practical issues that had to be addressed. Allow me to explain...

The planning ahead was a bit of a mission, but I got off to a good start when I managed to post a card to Paula while we were in Paris in August last year. My fear at the time was that it might arrive before our actual anniversary, but I should have had more faith in the local post office's lackadaisical approach. 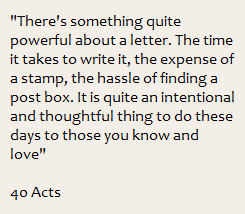 Keeping stocked up on writing materials, especially envelopes was also a mission. I bought my first batch of paper and envelopes in Paperchase in Blighty back in June last year, because sadly there aren't any shops like that here in South Africa. Once I had used those up I had to hunt around for stock, which thankfully wasn't too hard to find. Finding writing paper however, that was a whole other ball game!

Keeping enough stamps to hand was also testing at times, but worst of all was the disappearance of the postbox at the bottom of our road! The only place locally I could now post letters was at the actual post office in Somerset West or in Macassar which invariably involved an extra trip out. A year on and the postbox is still AWOL, I even asked the postman about it but he just shrugged!

There were practical issues around the time involved too. Sundays were the worst days to try and write because the day just seemed to slip away. The best opportunity on a Sunday was shortly after we got home from church, but normally by then my mind was fried so the opportunity often went begging, and after a rethink I started snatching a few minutes before church which really helped. It was also tricky making time when we were away as a family in January, and again when Paula & I had a two night getaway sans enfants in March. Suddenly grabbing the time alone to write was a bit more complicated. Paula's two week sojourn to Espana also caused some problems.

I have always loved writing with a fountain pen (which is unusual for a lefty) and I like being able to use different colour inks, so I used a couple of fountain pens. My favourite  is my old  Parker pen which just had to be used with an old fashioned bottle of Quink ink, it really is unbeatable!  My other fountain pen uses cartridges and I got our oldest niece to bring two packs of various colour cartridges with her when she visited in July last year. Yep, quite a bit of planning went into this!

One of my hopes in this was that I would get back into the habit of writing letters, and on the whole I would say I was successful in this. I certainly missed the days when I didn't have to write to Paula because I had planned ahead. Those days tended to be when I had not only written to her that day but also posted a letter in the hope it would arrive in a week's time. Due to the erratic nature of the postal service there were a few times when I didn't need to write for three days See pic at the bottom!) and in those times I could feel the habit struggling to stick. On average it took ten days for a local letter to be delivered!!

Committing to writing to Paula every day for a year also meant doing a few things I don't normally do such as sending a Valentine's card. I think Valentine's Day is a waste of space and little more than a marketing opportunity, but this year it seemed a bit churlish not to give Paula a Valentine's card on the day as part of this gift so I set aside my feelings and I'm glad I did.

So, back to the lesson I learnt from doing this... For me the simple step of clearing the desk and my mind to spend just a few minutes focusing solely on Paula helped to underpin my love for her as I was regularly reminded of what it was that caused me to fall in love with her all those years ago. The letters also helped to remind me of her features that attracted me and the facets of her character that have kept me by her side for 26 fabulous years.

As a result of what I learnt through this gift, I now challenge any man who is struggling with his marriage and contemplating divorce to spend one month writing to his wife, using those letters to tell her (but more importantly to remind him) just why he fell in love with her in the first place. To once again look at the things that drew them together and to dwell on the facets of her character that attracted him but also kept him by her side. I seriously doubt that any man that rose to this challenge would go on to divorce his wife.

So now I'm going to continue to write to Paula on a regular basis, not everyday, but as often as I can because I want to continue to be reminded of my love for her and to intentionally spend a few minutes thinking about her and her alone.


This gift gave as much if not more to me than it did to Paula!

My magic box. I used this to keep my writing paraphernalia together. Before I started I took great delight in spray painting a shoebox silver both inside and out. I was well pleased with the result. 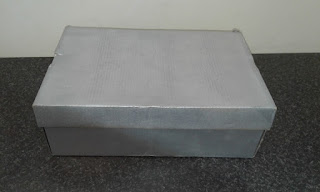 All neat & tidy, I even kept my reading glasses in there 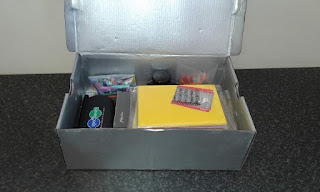 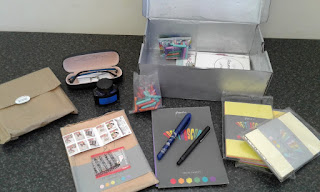 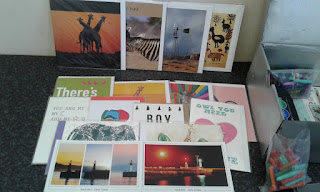 I used a ton of envelopes! 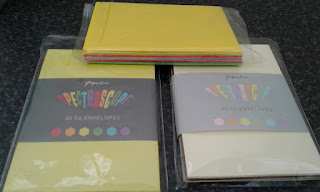 Paula posted this pic on Facebook on Valentine's Day, exactly 5 months into my gift 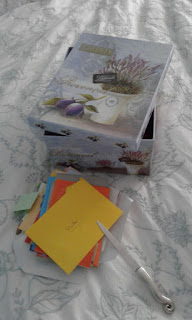 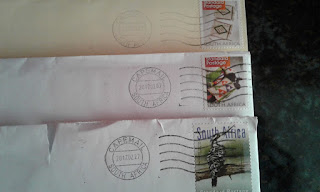 It wasn't always as straightforward as one would expect, especially as the South African Post Office isn't the most reliable institution on the planet!

I find it amusing that the post boxes outside the local post offices each have a plaque denoting the daily time at which they are allegedly emptied, though I have my doubts about the sincerity of said plaques.

Here are three letters written and posted on three different days; 27th Feb, 2nd March and 6th March, but all three arrived together on the 9th March! Go figure. The two posted in March were posted in the same box in Macassar.

Still, at least they didn't go on strike and burn any of my letters!