Day Zero is looming and is set for the end of March. 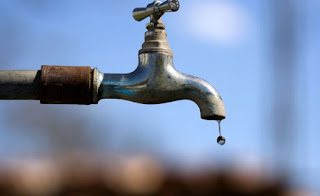 No we're not talking about the rise of a new Pol Pot or Jacob Zuma suddenly pulling a rabbit out of his hat and saving his political career. No, we're talking about the day that the taps run dry here in Cape Town.

Things are so serious that even the BBC are asking the question: Will Cape Town be the first city in the world to run out of water?

Firstly, let's be clear, this could have been avoided!


Had the local politicians been more interested in serving the people rather than fighting each other and worrying about re-election, they would have had time to listen to local experts and address a crisis that was looming 10+ years ago.

Sadly, the City of Cape Town has simply unleashed a raft of knee-jerk reactions which have always been too little, too late.  Add to this the fact that according to their own statistics that only 34% of Capetonians are making water savings and the whole thing is a mess.

We have idiotic neighbours who still water plants and fill their pool under the cover of darkness, thinking no-one will see them, and they're only tenants!  Thankfully they've just been given notice to quit so will be gone soon which is good news, but that's a whole other story.  The thing is, they're the norm in Cape Town when it comes to water. Sadly, too many people really just don't care!

So what do we do?

This month our water bill was the princely sum of R8 (£0.49) as we consumed 2Klt as a family of four over 30 days. Or to put it another way, we used 67lts of water per day.  We're allowed to use 87lts per person, per day so we could have used 348lts per day, but because we're part of the 34% who really do care, we used less than one fifth of what we could have.

This involves some unpleasant choices but we feel that's the cost of being a responsible citizen who cares for his fellow man, though sadly we seem to be in the minority.

We subscribe fully to the "If it's yellow, let it mellow. If it's brown, flush it down" school of thought, and the male of the species is banned from weeing in the toilet (except at night time), all weeing is done out on the garden.

Our washing machine and dishwasher waste water is diverted out onto the back garden.

All water used in the kitchen is strained (those bits go in the compost) and then thrown out onto various targeted bits of the front garden.

Our bathroom sink catches all the water used for teeth brushing shaving etc and is thrown out on the garden.

Showers are taken in the bath with the plug in. The water is scooped into buckets and used to flush the toilets. The water is turned off to the cistern and only grey water is used. It's not pretty, but it's very effective.  So much so that we wonder why anyone actually wastes clean drinking water on flushing the toilet.

Here are a few photos of our water saving efforts...

Water from our showers (in the bath with the plug in) is used to fill the cistern to flush the loos. The water has been turned off so they can't fill with valuable drinking water. 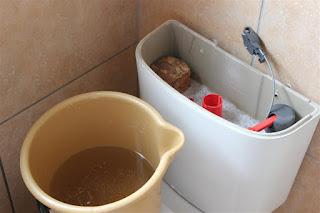 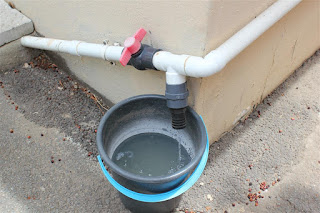 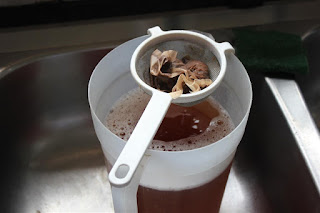 Washing machine and dishwasher waste goes out onto the back garden, see below... 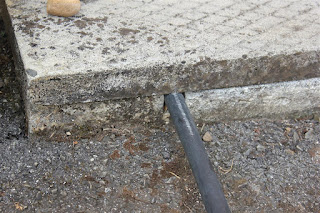 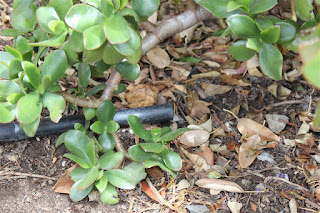