David & Jacqueline arrived safely yesterday afternoon, Praise God! Against the odds they managed to get a flight out of the UK (BA duly obliging) and arrive in Jo'burg where they had a few hours to kill before getting a connecting SAA flight to Cape Town. We’re quite amazed that they got through at all as the SAA strike is still going strong and is set to escalate as the Technical staff are on the verge of joining the industrial action and SAA's pilots are on the verge of striking, but for different reasons. As you can see from the photo, we've enjoyed a nice meal out tonight. 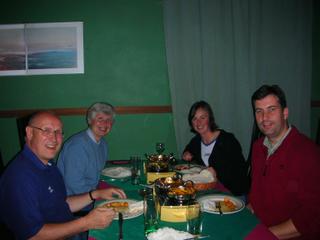 Paula had a good evening in CNP last night and will write more later this week. Dean's just returned from CNP having had a good afternoon there. The only negative being that he bumped into Sandra who was very cold towards him. Dean had already decided not to enter into the petty mind games she and others are playing, so their meeting (initiated by Dean) was brief to say the least!

Dean visited Peter (see the photo below) who is suffering with throat cancer which is quite advanced. On Monday Peter was told that the Dr wants to remove his voice box, but Peter has refused. His reason being that he is illiterate, so if he can't speak he'll have no direct means of communication. The consequence of this decision is that he will die earlier than if he were to have the surgery, but Peter feels it is a decision about the quality of his life not quantity. What a decision to have to make! 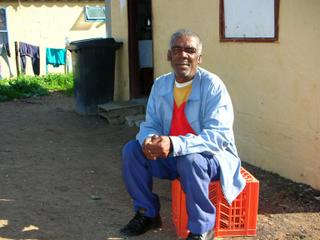 Dean also caught up with Cyril (see photo of him sat outside the Rasta's greengrocery shop in CNP - below). Dean took Cyril to hospital last week on the morning that we went to Franschoek and had agreed to run him home (before we left) but his appointment overran so Dean couldn't keep his promise. Cyril was a bit bleak at the time, but today he shared a testimony of God's goodness. Whilst in the hospital, one of the nurses gave him R5 for the bus, which cheered him up, then as he set off to get the bus he stopped by a church and paryed, thanking God for the bus fare. Then an elderly lady pulled up and offered him a lift home, she was on her way to Gordon's Bay and had to pass CNP, so Cyril was delighted and was really grateful for God's small mercies. 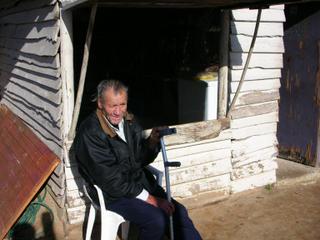 We really need to ask you to pray for Dina, she's really struggling since Lorraine's death, as she feels very unsupported within the community. The difference with Lorraine's death is that she's the first to have left an orphan behind. Please pray that we would be able to find some regular committed support for Dina, she really needs a discipler whom she can confide in and get thing off her chest with. We love Dina so much and really value her! A few of you have had the privilege of meeting her out here and you know what we mean! Without Dina our work in CNP would be so much harder than it is.