Dean had an excellent small group this morning with 8 men attending which was a first. They all said they enjoyed the study (we were looking at Samuel) and said they would come again next week, so that's really exciting. To think that just a few months ago I was struggling to get 2 regulars to commit! The three new guys this week were Danny (Anna 'Bop's' partner) Trevor & Willem (see photo below). The group want to continue our season of Character Studies so we will carry on with that and include some New Testament characters in the coming term.

Whilst the group was meeting Michael received a letter from the municipality telling him that his water supply will be cut off in seven days unless he pays the outstanding bill of R8799 (about £750), the bill is actually his father's as it is his house. Unfortunately Douglas (Michael's dad) has a tendency to turn taps on and leave them running for 24hours, which is totally irresponsible, but that's one of the drawbacks of being constantly drunk. This has left Michael & Joyce in a really difficult position, but hopefully they will go to the municipality and sort out a payment plan to avert the cut off. This is a classic example of the hardships the flok in CNP face on a daily basis.

Yesterday Dean visited a number of sick folk and consequently will be taking a number of them to the clinic tomorrow (Friday) at 7.30am. One of the people is a Rasta' called Gert who has really bad TB and can barely move. Unfortunately his house stinks and so no-one wants to go in and see him. Hopefully the clinic will just refer him to the hospital where he could get the help he needs. Aunty Kuku (Patrick's wife) will also be going to the clinic as she has had a minor stroke which has left her struggling. Please pray for these folk, pray for healing and for care. As well as visiting the sick, Dean went to see Aunty Blaby and spent a while with her and the family talking about Anna. Aunty Blaby is such a quality lady! who does so much for others in the community. please pray that God would bless her, especially at this time when she is not only struggling with the death of her daughter, but is struggling with getting the money together to pay for a funeral. If the family can't raise the money, Anna will have a 'paupers' funeral which means the family will not be allowed to attend, this also causes difficulties with obtaining the death certificate which has major implications such as the children will receiving no financial assistance from the state.

From left to right: Peter, Cyril, Alfred, Trevor, Michael, James, Willem, Danny. In the foreground is our tea & coffee making paraphenalia, each week we take refreshments in for the group. 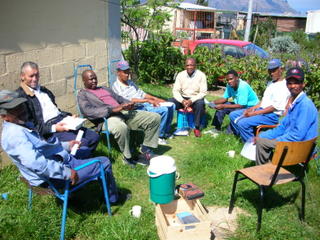