Monday started with Dean taking Michael to the courthouse to get some legal advice as he's been served with a summons to appear on the 16th November in relation to his tenure in CNP. Basically, the house belongs to his father (Douglas) who wants Michael & Joyce out. Unfortunately for Michael, his father has enlisted both legal aid and the ANC so he has a very strong team, plus the fact that legally he is the householder. However, Dean believes that Michael has a strong moral argument for remaining in the house as his father is a danger to himself when left to his own devices. Prior to Michael moving in, Douglas had caused a serious fire in the house, he's run up a R8000 water bill and when he receives his pension he gets blindingly drunk and 'loses' the rest of his money, becoming dependent upon Michael & Joyce for food, electricity, laundry etc. Dean has seen Douglas being brought back to CNP a number of times by the police who have found him unconscious somewhere. Please pray that the court would see sense and that the law wouldn't be an 'ass' and Michael & Joyce would be allowed to remain in the house.

We had agreed to call the ACVV on Monday with a decision about the child they asked us to care for, but when Dean rang the worker was out so he left a message and we're awaiting their return call. Thankfully this gave us another evening to continue talking and praying about the situation and we're fairly certain about how we will proceed so more on that on Tuesday hopefully.

In the afternoon we had arranged a meeting between Dina, Aletta and Mama Jane, unfortunately Dina & Aletta have fallen out and been gossiping about each other quite badly over the last couple of months, with neither showing much will to change. This has had a really negative impact on the church's witness in the community, so we had to address it. When we arrived at Mama Jane's Dina was really angry and to be honest we didn't really understand what she was shouting about. Aletta came and stood outside waiting for Dina to calm (this must have been quite difficult as Dina ranted about her) but thankfully Paula was able to calm Dina and so Aletta entered the house and we started the meeting. God was so amazing! It took over an hour, but we were able to talk about our witness in the community and personally as Christians; how we should strive to love one another, how influential they are etc. etc. By the end, everyone had managed to have their say without ranting and raving and they even asked forgiveness from each other (without being prompted) and hugged and kissed. We were a bit bowled over, but we praise God and now ask that what was birthed yesterday will keep growing in their lives and would lead to a real change for them personally and in the community. 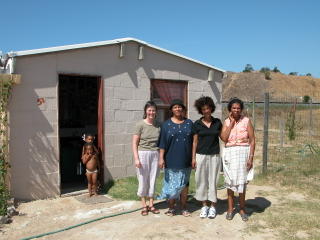