Thank you for your prayers for Joel, he woke up this morning as if nothing had been wrong over the last three days, Praise God! Today has been an almost normal day for him other than being quite tired. His cough has almost totally abated and his temperature is completely normal. We really value your prayers and we're really grateful to God for answering them so swiftly for Joel.

This morning in church we said goodbye to John & Sophie as they'll be returning to the UK shortly (after some well deserved travels around Southern Africa), they've had a huge impact on our kids work, especially with 'Launchpad' (ages 8-12) and they've managed to follow up with some of the kids on Monday afternoons in Chris Nissen, which has been great. Dean will really miss this input into CNP. In honour of the impact John & Sophie have had with the kids, we actually had some child friendly worship which was great, this was then followed by a party outside for the kids which generally involved lots of face painting, getting wet and having a lot of fun. We'll post some photos here on Monday and some more on our 'Photoblog' during the week.

This afternoon we went to the Nature Reserve to see Spikey, Joel was delighted that Spikey came out of his Den, even if it was to eat the bread we'd brought (which was really meant for the ducks!). Joel seems to have progressed beyond his fear of Spikey and as you can see from the photos below he's really into him now.
Spikey enjoying the bread meant for the ducks 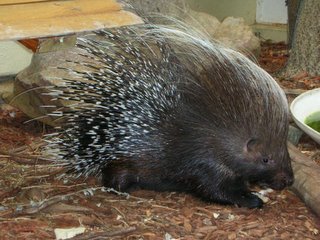 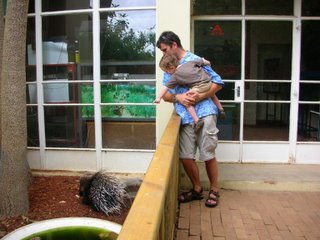