There have been lots of fires in the Western Cape this summer and things are set to get a lot worst as we've just entered another drought period, although the drought shouldn't be as bad as last year. Late last week there was a huge fire in Grabouw which is just the other side of the mountains and shortly before that there was one in Franschoek which apparently destroyed an area the size of 40,000 football pitches! Table Mountain National Park has had to deal with a few major fires too, which is disastrous for tourism.

This photo is of one of the many helicopters pressed into action to tackle the fires from above. Needless to say Joel finds all the activity very entertaining. 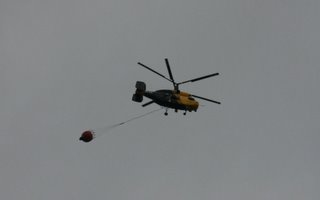