Death has been a fairly frequent visitor to CNP this winter with another death on Monday. Samuel died in the early hours having had a long fight against TB. We helped him on many occassions with hospital and clinic appointments and tried to sort out his 'unemployment benefit' which he had contributed to, sadly getting blood out of a stone was far easier! Please pray for Susan who cared for samuel, she put up with a lot of grief from him and yet she was uncomplaining through out. Also, Samuel had no funeral policy so there will be a heavy financial burden on the family to pay for the funeral. Hopefully his former employer might help.

On a happier note, Mama Jane has at last built her extension. She dilligently saved R1000 every month for 18 months and the extension has now been paid for in it's entirety. Mama Jane now has her own bedroom as does her son James and her twin grandchildren. Praise God for such a dilligent witness in the community! There is a lot of gossip at the moment as people believe the church paid for her house, however we gave her absolutely nothing towards it. Mama Jane has been addressing this herself in the community and we're so proud of her for doing so. 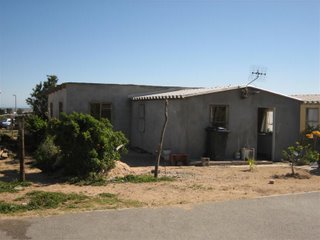 Life seems to continue to tick by whilst most live pretty much hand to mouth. Folk in CNP make the most of what they've got and get by as best they can. Below is a photo of Michael and Booty (Mama Jane's grandchild) sitting in Michaels lean-to stoop. 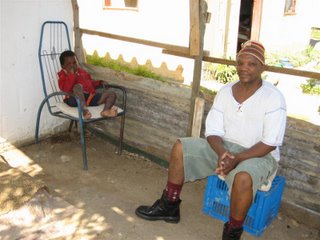