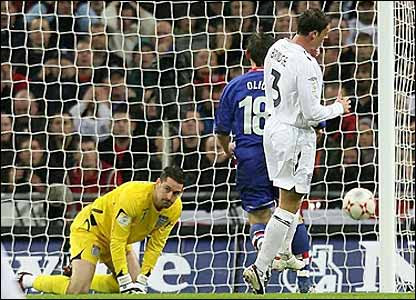 Can there be any other way to describe a totally inept display by a rubbish team? England fully deserved to lose and lived up to that expectation. Having been gifted an easy final game following Israel's win over Russia, beating Croatia at Wembley really shouldn't have been a tall order, especially when a single point would have sufficed.

McClaren was never the man for the England job and thankfully has proven the point. His decision to drop Mrs Robinson in favour of Scott Carson was very odd, but to leave him off the bench was stupid. I'm no fan of Mrs Robinson or Calamity James, but surely in the face of such a huge match it was not the time or place to mess about with the team. Eight minutes in would have been a good time to sub Carson off and give Calamity the gloves, but no, Carson got a full 90 minutes on the pitch. Why? As for the 4-3-3 being moved to a 4-5-1, what on earth were they thinking!!!! What's wrong with a 4-4-2 in which two strikers receive service from 4 midfielders. Please make the next England manager play proper football!

So McClaren won't resign. Well he clearly has no integrity or dignity and would rather wait for the ignominy of being sacked. With the FA meeting this morning, I guess he won't have long to wait for his P45. Good riddance!

Whoever takes on the England job (who would want it?!?) has got a tough road ahead. The time has come to stop hanging a limp team on some limp superstars. Beckham can no longer bend it. The only consistent thing about Owen is his inconsistency! (I know he wasn't on last night).

The England team should be built around the many promising youngsters coming through the ranks of the Premiership, not on has-beens who would serve better on some naff reality show.