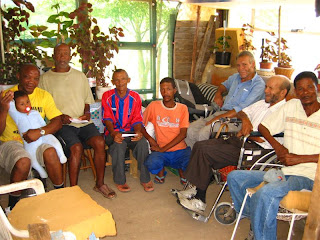 This morning we had the first meeting of our revamped Men's Bible Study in Chris Nissen. After the disappointment of the group falling apart last year I was really encouraged in the last couple of weeks by the number of men who said they would be coming to the group. Well today I was even more encouraged as seven men rocked-up and two others wanted to but were unable to (one was at the clinic and the other is in Caledon with family).

This morning's group was mainly social to discuss where the group is going and to plan some of our studies. For the first few weeks we'll be looking at the Bible itself and exploring what it is, who wrote it and looking at the differences between the Old and New Testamants. The men were excited too and seem much keener to get involved this year. We also agreed we need to become a praying group an a welcoming group.

Please pray that this would be the start of some amazing adventures with God in CNP.