We've generally been at home and chillin' out this weekend although we did pop to the aquarium for the morning on Saturday when we renewed our membership (this is our fourth year of membership) and had a great time wandering around. Joel was particularly excited as he'd taken his Shark puppet to "help" with the puppet show, which he did by attacking Nemo! Joel was also pleased to note that his shark and octopus puppets are exactly the same as the ones used by the aquarium. They've revamped quite a lot of the aquarium and it's looking very good. They're also changing a few of the exhibits so we look forward to some more changes there.

The boys have really enjoyed playing at home and generally chasing around, having bundles with Dad and watching a bit of TV. Joel & dad watched David Gilmour in concert on DVD this afternoon which was great. Apparently Shine On You Crazy Diamond is the aquarium song, but we can't get Joel to tell us why. Interestingly, we used to play that particular track to him whilst he was in the womb and even now he really calms down when we play it.

We've been melting over the weekend too as it was still 30°C at 10pm on Friday night and it was 37°C at lunchtime on Saturday. Today has been a little bit cooler but still gloriously hot! We've still got the hottest month of February to come! 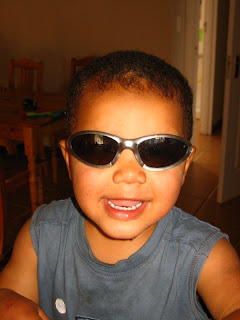 Dad had to empty the hoover bag today and rummage through its contents to retrieve some lost pirate paraphernalia, nice! Thankfully we found quite a few bits including the missing skeleton head (don't ask) so Joel had a great time playing with his pirate ship and bits 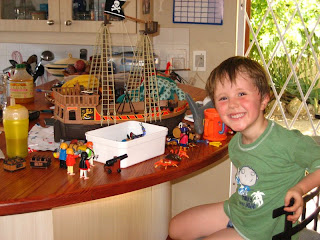 Eli knows how to work the hammock 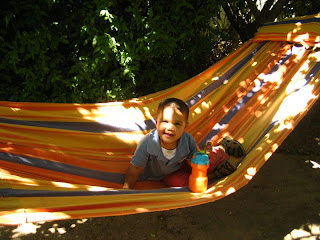 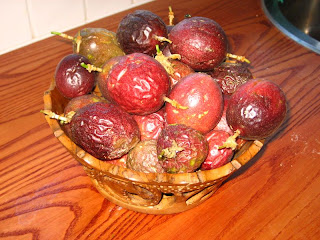 We've been enjoying a reasonable harvest from our Granadilla bush (passion fruit) in the garden. the season didn't start too well as the blooms were marvelous but most were blown away in the very strong winds around Christmas. However the bush seems to be bouncing back giving us 21 granadillas today.