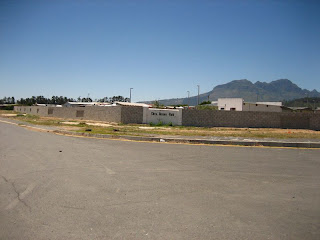 Until recently CNP was exposed to the world, but as the builders get closer and closer to the land immediately surrounding the community so the developers see a need to build a wall around CNP. Initially the wall was just to be at the front but now it has been decided that it will completely enclose the community. The residents of CNP seem happy with this but we're not so sure that they've really given any thought to the long term implications of the wall and the inconvenience of no longer being able to duck out from their own back yards.

Part of me feels that in many respects the community deserves to be walled off from the rest of the world as some of the residents can be a real nightmare. Not least some of our beloved church members! This week has been a bit of a frustrating one as I've begun to learn the truth about the extent of the gossip about myself in the community. Sadly three of our longer term members are the worst for this gossip which seems to be born out of their jealousy of me working with others in the community. Pathetic isn't it!

One of the men in my bible study group told me that he was talking to one of our church members who happened to be very drunk (another long-term problem). She was gossiping about Michael and how she knows that each time she's drunk he rings me to gossip about her. Oh the pettiness of it all! I'm expected to dignify this rubbish by defending myself, Michael and our church against those doing the gossiping, but I simply can't be bothered! I have better and more constructive ways to spend my time.

Much of last year in our church was taken up with exploring the values and beliefs of the church and our expression of the local church. One of our elders came up with a great vision/mission statement: Belong, Believe, Become. The idea being that as a church we should be inclusive and welcoming just as Jesus was, so that people may have a sense of belonging. This should then lead to believing in the gospel message and then to becoming more like Christ. This was followed up in our mid-week small groups and we had hoped that the message was getting through to everybody. Unfortunately some of our members in CNP simply don't get it and when they see other residents of CNP coming along to church they gossip about them and generally do what they can to chase them away. This seems to be born out of a fear that others might receive something that they feel should be theirs. Clearly we've got a long way to go before our members in CNP even begin to grasp the basics of the gospel!

Please pray for our church members in CNP, some are solid gold and are people we can build with, but many are a bit of a nightmare. Pray too for grace for us as we try to work with all in the community as we seek to win it for Christ.