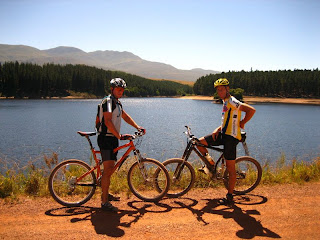 It's now just over a year since I made the commitment to ride my mountain bike three times a week regardless of the weather or whether or not I had anyone else to ride with. Early on in my new endeavour I would end up riding quite a bit on my own, but I soon found a good crowd to ride with and ride regularly with Paul (on the left in the photo) who has become a good friend and cycling buddy.

So what impact has this riding had on my health and fitness? Well, last year I lost 14kg's but then put two back on (probably muscle) so now my weight is steady around 88kg's. I've become very strong on the bike and really enjoy hill climbing. I used to dread the hills so it's great to no longer be intimidated by them.

To test where we were at on the bike we entered about 8 races last year with the first being the Tru Cape 40k at Grabouw in early May. This was a disaster! I had measles (see here) but was unaware of it. I set off too quickly at the start, keeping up with the big boys for the first 10k's and then had no legs left for the rest of the race. I also wiped out quite badly on 18k's but managed to carry on. We weren't Pedal Power members back then so had no official times but we finished around the middle of the pack. Not too bad given all the drama. Thereafter we got better and by the end of the year we were pretty much up there with the big boys, finishing in the top third of our last few races. I think the best race was the Karoo To Coast from Uniondale to Knysna which is a 100k race. 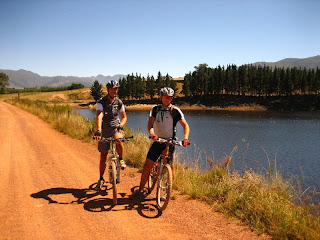 In fact my first ever race was the Cape Argus which is a 109k road race which I completed in 4:06 on my mountain bike. I'll be doing it again this year on the 9th of March aiming for a sub four hour time, but I'll also ride the Boschendal MTB the week before so assuming I complete both I'll get the third medal for completing both Cape Argus marathon events.

So at the moment I'm riding for fun and building on fitness and strength ready for this year's race season in which I hope to do much better than last year. I'm generally riding three time a week but whereas early last year my rides were generally around the 35k mark now most of my rides are around the 50k mark. In fact this week alone I've ridden four times for a total of 12hours and covered 184k's, so it's all going quite well and is immensely enjoyable!

I'm also planning to do the Cape Epic in 2009 with another friend. So watch this space, especially as we seek some serious sponsorship to make it happen and raise some money for charity.