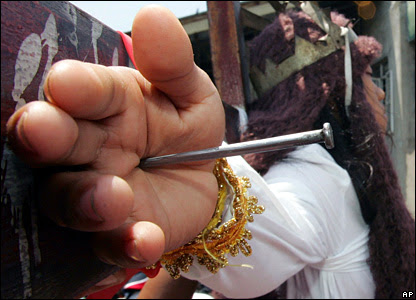 Easter is the most important of festivals for Christians and as such we celebrate Easter in a low-key but meaningful way, taking time to remember that by giving up His life, Jesus opened the way for us to have life and a genuine relationship with the Father. For us this is a very important time of year, much more so than Christmas or any other festival.

Sadly, Easter is traditionally becoming the time for the silly season to kick in. Over the last few years there have been a number of idiotic claims made about Christ at Easter. Last year Christianity was "rocked" to its very foundation by the gospel of Judas. Some jumped on this pathetic bandwagon out of ignorance or just sheer hatred of Christianity, but there was no rocking of the foundations of Christianity because 'open-season' was upon us and anybody with a modicum of intellect could do a little research and see the gospel of Judas for what it was.

So, here's a collection of this year's offerings, some silly, some serious and some just trying to be objective..

What does the Bible actually say about being gay? BBC News

The Jesus Puzzle, An Exercise in Mythmaking - Earl Doherty A critique by Ben Witherington

Crucifixion not good for your health The Australian

The BBC article about Religion & happiness contains a brilliant quote from Professor Andrew Clark of the Paris School of Economics in which he says:

"What we found was that religious people were experiencing current day rewards, rather than storing them up for the future"

Me thinks he somewhat misses the point, at least from a Christian perspective.