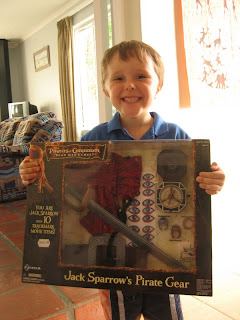 Joel was given some money for his birthday so yesterday we managed to sneak out to the toyshop without Eli so Joel could choose whatever he wanted (as long as he had enough money).

We don't think Joel could have been more overawed than he was and he certainly spent plenty of time taking everything in. Inevitably the pirate section was given the most thorough scrutiny and eventually Joel chose a Captain Jack Sparrow accessory pack for exactly the amount he had. Paula wasn't too pleased thinking it was overpriced but the sheer enjoyment Joel has had from it is priceless. He even slept with the headdress on last night!

Pirates remain a firm favourite in the Finnie household! 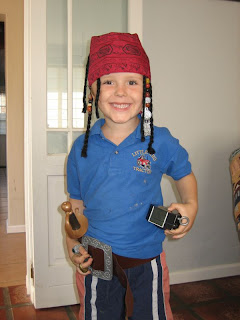