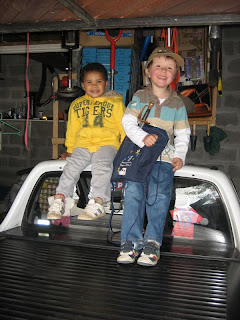 After a very frustrating week with no phone line and 10 days without internet access we're finally back online. Telkom sent an engineer out on Sunday morning to sort it all out, which we thought was quite impressive, although it meant I was an hour late to church. But we've got our phone back so must not complain!

In some ways it's quite liberating being unable to access emails and the web as it gives you so much more time to do proper stuff. I hadn't realised what a waste of time the web and email can be until it was taken away!

We're all OK but we're fighting the dog-ends of various colds, ear infections etc. with Eli suffering the most. The weather has been truly appalling over the last week with torrential rains leaving the garden flooded and the boys unable to play out - frustrating for them and us. The Western Cape has had more than enough rain this winter. All the dams are full and the water table is saturated, so at least we should get through summer (when it finally arrives) with no water restrictions. 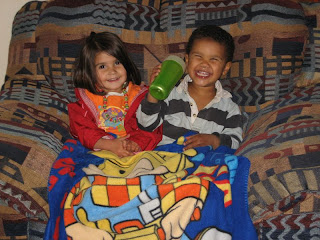 The boys have been enjoying having Iza to play on Tuesdays as her Mum is struggling with a back problem. Eli & Iza are as thick as thieves and quite mischievous together, which is fun, whilst Joel just adores her. Iza is a real pleasure to have around and it's quite nice having a girl in the house, it changes things.

We've continued to be busy following up lead and contacts although some of these have been very poor at getting back to us. We've been spending some time with our friends in Chris Nissen, but as we don't have any spiritual covering at present we're not in there as much as we would have liked. We miss our friends there and feel sad that our involvement with the community is very likely to diminish a lot further.

On a more positive front, we've been going to a small church about 10 kilometres away and are talking with them about serving them and the community where they worship. We've been inspired by the leadership and their approach to church and amazingly the boys are getting excited about being in church which is a first. For the last four years Joel has been in amazingly well resourced and professionally run Sunday school but he was bored and didn't enjoy it. Suddenly, he's in a chaotic situation which is under resourced and run in an ad-hoc fashion but he's loving it. Personally, I believe that he's seen the passion and faith of the leaders and is responding to that. One doesn't realise what one has put up with and compromised on until one goes to something vibrant and fresh. More on that in the coming weeks and months.