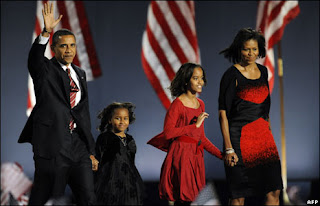 This morning I've got to express my sense of pride in the American people. By electing Obama to the presidency, they have given the Republicans a 'bloody nose' and said 'enough is enough' to Bush and his cronies. This election result also says a huge 'no' to war. Forget the history of the first black president, this result is about change and the fact that the ordinary American wants to see things change big time.

So why my excitement? America affects the world like no other nation! what happens on that side of the Atlantic has ramifications everywhere. Living and working in Africa, one quickly becomes aware of the influence America has, especially in the fields of HIV and AIDS. America donates more towards these issues than any other nation. Hopefully with a visionary like Obama in charge, things will get a lot better for a lot of people.

Two great quotes from Obama's victory speech:
"If there is anyone out there who still doubts that America is a place where all things are possible, who still wonders if the dream of our founders is alive in our time, who still questions the power of our democracy, tonight is your answer,"

And regarding John McCain: "He has endured sacrifices for America that most of us cannot begin to imagine,".

The last time I felt this hopeful about politics was in '97 when New Labour thumped the then washed-up and corrupt Tories. Sadly they failed us. I really hope Obama can avoid similar pitfalls.

For now I am really hopeful for the future, I believe America and the 'American Dream' is in safe hands now. God Bless America!