Who Did You Vote For?

Over on the BBC News website there is an article about the US election entitled: Who voted for Obama. It makes for some very interesting reading and tells you quite a lot about modern America. One of the things that struck me from it is the fact that older whites are generally pretty scared of anything resembling change, especially if that change is represented by anyone other than an old white man. 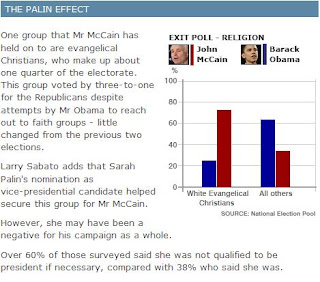 Anyway, my point here is nothing to do with that but to do with the bit entitled: The Palin Effect (see image to left) which is about evangelical Christians in the States, who happen to make up about one quarter of the entire electorate. As the exit poll shows, they voted overwhelmingly for McCain, whilst amongst other faith groups the ratio is roughly 2:1 for Obama. So why do so many evangelical Christians vote for right-wing political parties? I've wondered about this for years. In fact, I first pondered on this when as a young man (and a new Christian) some idiot told me that the Tory party (in the UK) was 'God's party'. At the time I didn't challenge this assumption, mainly because I was too young and immature and also a bit intimidated by this older guy. Today I would roast that kind of comment and would have a thing or two to say to people who hold similar views.

My problem with adhering to the beliefs and principles of parties like the Tories and the Republicans is that their politics are underpinned by certain assumptions, namely, tax cuts which benefit the wealthy and reductions in social services (health, education etc) which negatively impact the disadvantaged. I struggle to understand how a Christian can condone such principles when they clearly fly in the face of Christ's teachings. A quick perusal through the Beatitudes in Matthew should lay such ideas to rest.

Throughout the Old Testament there are repeated warnings not to mess with three groups of people: widows, orphans & aliens (asylum seekers et al). The warnings are stark and the consequences are dire. Zechariah 7:10 sums it up well: "Do not oppress the widow or the fatherless, the alien or the poor. In your hearts do not think evil of each other." There are many other scriptures on this subject such as: Ex 22:21-24, Lev 19:10, Lev 23:22, Dt 10:18, Dt 24:19-22, Ps 94:3-9, Jer 7:1 & Eze 22:29 to name a few. Just in case you think this is OT law and not relevant under the covenant of grace, check out what James has to say: "Religion that God our Father accepts as pure and faultless is this: to look after orphans and widows in their distress and to keep oneself from being polluted by the world." (Jas 1:27).

I'm not suggesting for a minute that New Labour or the Democrats are God's party either, goodness knows that Labour have been a dismal failure and Obama is only human so he will fail in some things. But that's the problem with putting faith in mere mortals. However, it strikes me that the early church in the book of Acts actively sought to address the needs of the poor in their midst by selling possessions and giving the proceeds to be distributed by the apostles (how I long to see a radical New Testament church in my lifetime). In fact the principles of caring for and reaching out to the poor/oppressed/marginalised etc. run deep throughout both testaments and should underpin our faith as much as any other aspect of theology. Sadly, this rarely seems to be the case, especially in the developed world.

I remember hearing a guest speaker at bible college dismiss the early church in Acts as being 'immature' and as such, church had moved on from such simplistic thinking. My response then is the same as it is now. The early church in Acts was the epitome of a spiritually mature church and a clear model of what we as Christians should be striving for in our own churches.

Imagine how different the world would be if instead of hailing Obama and his like as 'messiahs', the world looked to the true Christian church and hailed Christ's bride for the beauty she exudes!