Blogging From A To Z Challenge - N 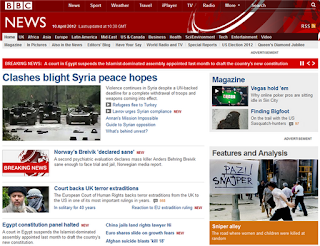 N is for News

Like many, I'm more than a little addicted to the news and read as much as possible. I say read because I rarely watch the news these days because invariably when I do sit to watch it I've read more in depth about the top stories than I'm going to get from a newsreader's soundbite. When I do get to watch the news I'm guilty of watching that triumph of style over substance known as Sky News. Oh the shame!

My favourite source of news is the BBC and their world news website is almost constantly in an open tab in Firefox. I like their in depth coverage and their lighter take on things such as their In Pictures features and the weekly news quiz to test how much attention one has been paying.

One of my frustrations with the news is that in our 24/7 culture news gets spread a bit thin and so speculation is often touted as being news when it's anything but. I particularly dislike this when a major incident has occurred and in the absence of hard facts speculation and supposition become the order of the day. Sadly all the news channels are guilty of this.

Still, I love reading/watching the news and can't see that changing anytime soon.