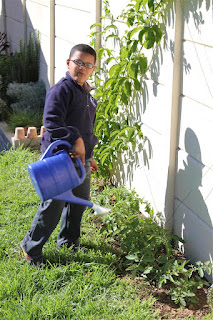 Percy Thrower I am not so where Eli gets his desire for a bit of gardening is a mystery but one that shall be capitalised upon.

A while back he asked if he could grow some tomatoes and somehow he managed to sweet-talk mummy into taking him shopping for seeds etc.

That was a couple of months ago and today Eli has eleven very healthy looking tomato plants which he actually grew from seed.

So this afternoon he was über excited to see that one of his plants has two small green tomatoes on it. Bless him, he had no idea what they were because they were so small and green, apparently "they don't look like the ones in the packets".

We're not too sure what sparked his interest in growing tomatoes, I suspect that Charlie and Lola might have had a part to play in all of this, but it can only be good, especially if he actually starts eating the things.

Apparently spinach is next on his list of things to grow. One can only marvel at his choices and hope that somehow the freshly grown produce might encourage him to eat something green for a change. 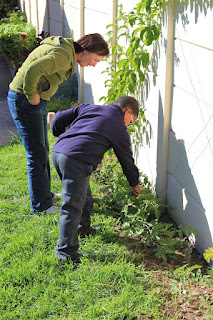 The biggest of the two lurking in the greenery 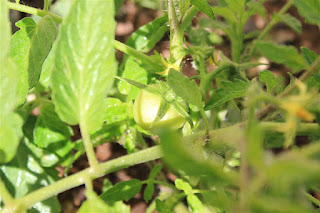