A Quiet Morning With Man Tools 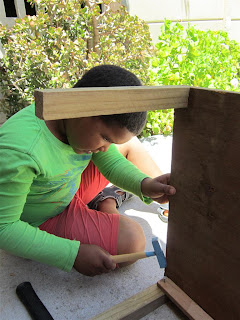 When mum and Joel decided that they were going to go and see The Hobbit at the cinema we asked Eli what he would really like to spend the morning doing.  With no hesitation he answered that he would like to make something!

So dad and Eli spent the morning going to the salvage yard, buying some wood for R5, coming home and getting out the hammers, nails and power tools - heaven for Eli!  He quickly decided that he was going to make a table and chairs for his two Build a Bears formerly known as Ron and Jackie after some lovely friends of ours in the UK and now (apparently) known as Ron and Harry seeing as one of them is ginger - therefore Ron Weasley - and the other must therefore be HP himself!!

A very happy morning was spent banging, cutting, sawing etc and Eli put all his creative juices into action.  We have his godfather John Foot to thank for all of Eli's DIY creativity, ever since a very exciting and special afternoon with him in his work shed one cold Saturday in England several years ago now Eli has never been the same and often complains that his toys are lame and that he would really like to make something!!

So as you can see, the table and chairs now has pride of place next to our own and Eli is a happy bunny!


The boy's in paradise! 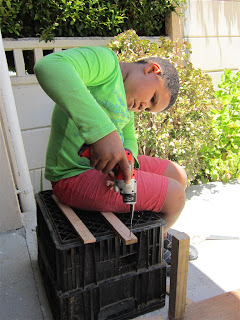 The finished articles, just in need of a lick of paint 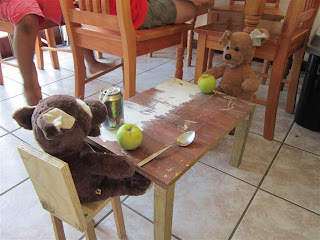