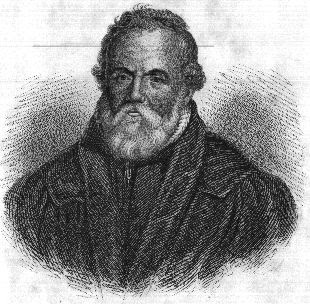 "There but for the grace of God go I"
This is a quote attributed to John Bradford (1510-1555), an evangelical preacher and prebendery of St. Paul's cathedral. Though there is no actual evidence to support this attribution I'm sticking with it because it's so fitting given that he is said to spoken these words whilst he was in prison.

The story goes that one day as he was looking out of a window in the Tower of London he saw another poor soul being lead to his execution and uttered this now immortal phrase which has subsequently been used and abused to the point that it has entered the common vernacular of many cultures and languages around the world.

Whether John Bradford actually spoke these words or not he was living on borrowed time and was burnt at the stake on the 1st of July 1555 for refusing to recant his protestant beliefs.


I love how this phrase has become one of many idioms used in the English language on a daily basis regardless of faith etc.

I also feel this is a phrase that we should all hold dear, especially those of us involved in church leadership and remind ourselves of next time we feel we're better than someone else, because we're not!

Labels: a to z challenge, church